This is my second attempt with these two birds. I saw the scene in my mind’s eye but translating what’s in the head through the fingers and onto the page sometimes doesn’t come out the way you pictured it.

The first attempt I did not like, but in the interest of showing my work, here’s the first draft:

This is proof the more you practice, the less you suck. It’s important to keep going. Have faith the next attempt will show improvement. Keep painting!

“One must spoil as many canvases as one succeeds with.” —Vincent van Gogh

“I have to remind myself that some birds aren’t meant to be caged. Their feathers are just too bright. And when they fly away, the part of you that knows it was a sin to lock them up does rejoice. Still, the place you live in is that much more drab and empty that they’re gone.” —Red, The Shawshank Redemption

Posting an old favorite I made during ICAD a few years ago for Day 8 of the 28 Feathered Friends Art Challenge. Day 9 for The 100 Day Project.

Free as a bird is the prompt for Day 7 of the 28 Feathered Friends art challenge. And that’s how I felt creating this groovy little sketch. I kept going back to the 70s with this prompt. Watercolor and pen.

Breakfast at Tiffany’s or maybe window shopping? A colorful take on our backyard bird friends. Also Day 7 of The 100 Day Project.

Tomorrow’s prompt is “free as a bird” and I have no idea what to create. I may call it a day and find inspiration on a fresh page in the morning.

On the night of May 22, 2012 I turned on the floodlight in the backyard to see about storm damage. What I found was a pigeon on the tall fence instead. He was soaked and exhausted looking. He allowed me to get close enough to capture and I brought him in and borrowed the dog’s crate for a makeshift cage. I figured I’d allow him to dry out and then let him go the next day.

He had a band on his leg. A google search with the alphanumeric ID resulted in an owner located several hundred miles away. Turns out this pigeon had been in a 600 mile race and had gotten off course from the inclement weather.

And thus began my venture into the world of homing pigeons.

I never heard back from the owner so the next day I sat the crate, door ajar, on the back porch in the sunlight and waited. He had eaten seed and drank water. He seemed okay. I watched as he flew west and disappeared across the Ohio river.

I continued to learn more and became fascinated with these birds. That autumn I found one for sale at a local trade days fair and that’s where I met Gina and John Bender. John, a pigeon expert of 50 years. He holds titles in state and world competitions for racing and roller pigeons. He’s even written a book about his experiences which you can buy from Amazon here.

He explained the pigeon I bought was called a Blue Barless – no bars on its wings. Later, he gifted me with a light black grizzle – the white with black tipped feathers. They were a joy to have around.

Today’s watercolor is of my daughter and me holding them for a photo. This is Day 5 of the 28 Feathered Friends art challenge and also an entry in The 100 Day Project. 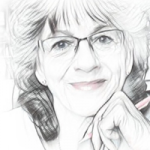 Bex is an artist who writes and a writer who arts. She creates in Studio BE overlooking the Ohio River.