In late 2015, a year post-transplant, my physical health had improved, but mentally and emotionally, I still struggled with survivor’s guilt and depression.

My counselor suggested I try a 365 grateful project: each night, for a year, write something down about my day I was thankful for. So I did.

On January 1st, 2016, I began the project and used random scraps of paper tossed into a basket. After a few weeks, I put a cube of colorful notes into service and used an old Mason jar for a container.

As the bottom of the jar filled, the weight I felt lessened. I caught glimpses of light through the veil of darkness that seemed to cloak me. There were some days, like on August 9th, all I could write was one word: Nothing.

Fortunately, that was the only day I couldn’t come up with even one thing I was thankful for.

On January 1st, 2017, I opened and sorted the notes and relived the previous year, one day at a time. I found messages from others who had added their notes to the jar; each one a heartwarming hug on that cold winter morning.

Seeing and celebrating the good in my life every day, even in small ways, I experienced firsthand the extraordinary power of gratitude.

I could not ask for more.

This is the 49th story in the Objects as Waypoints Writing Project series. 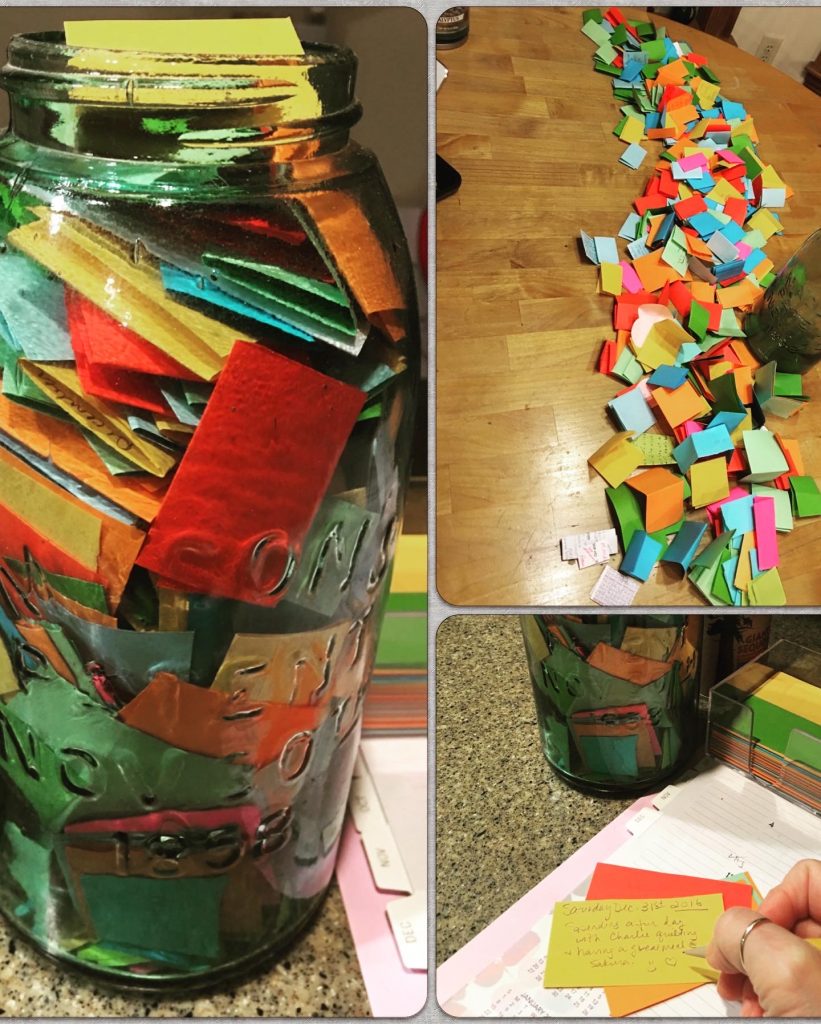 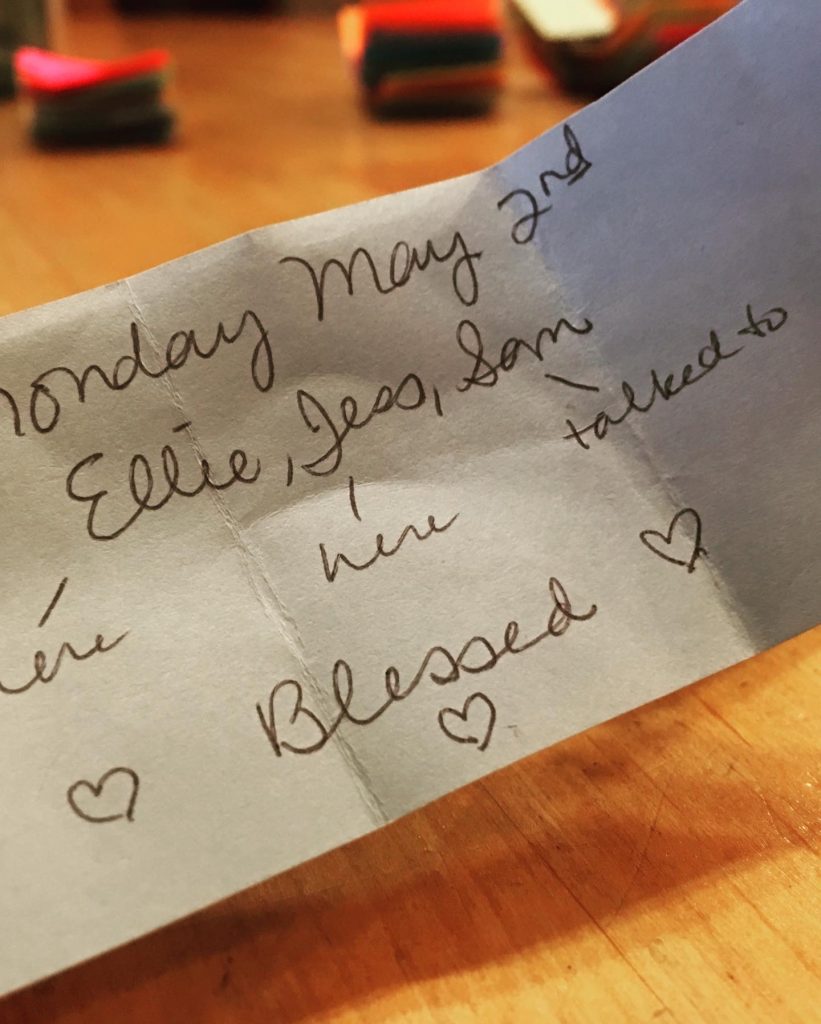 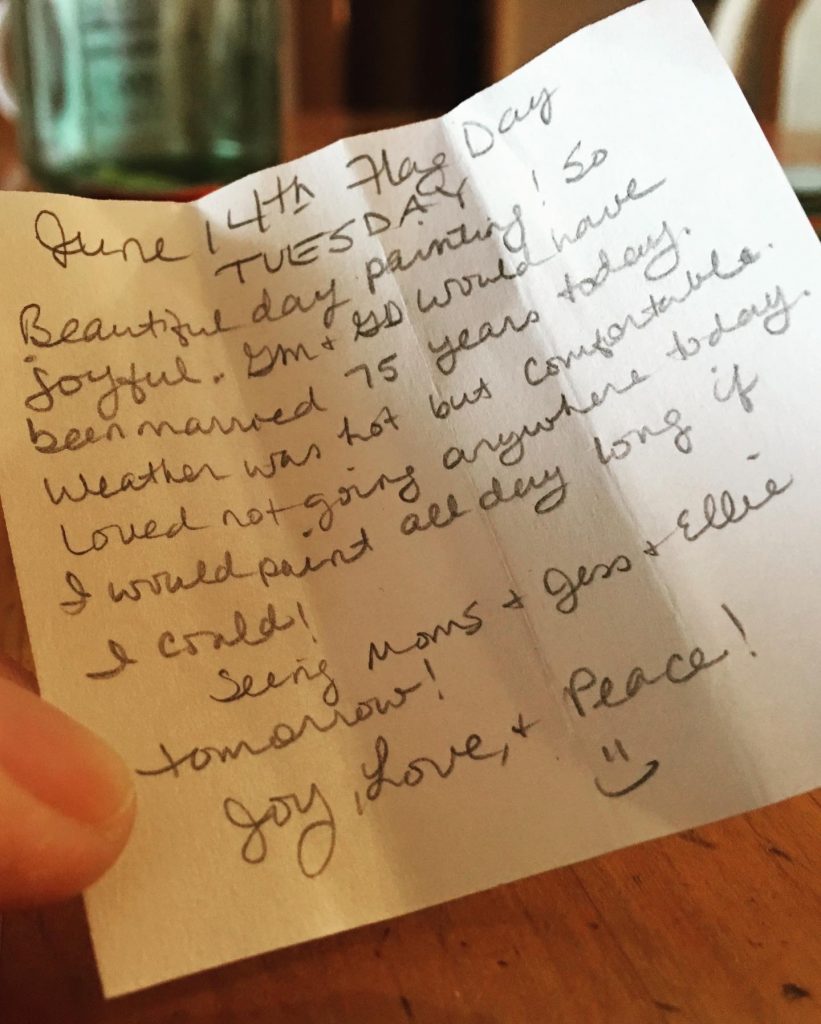 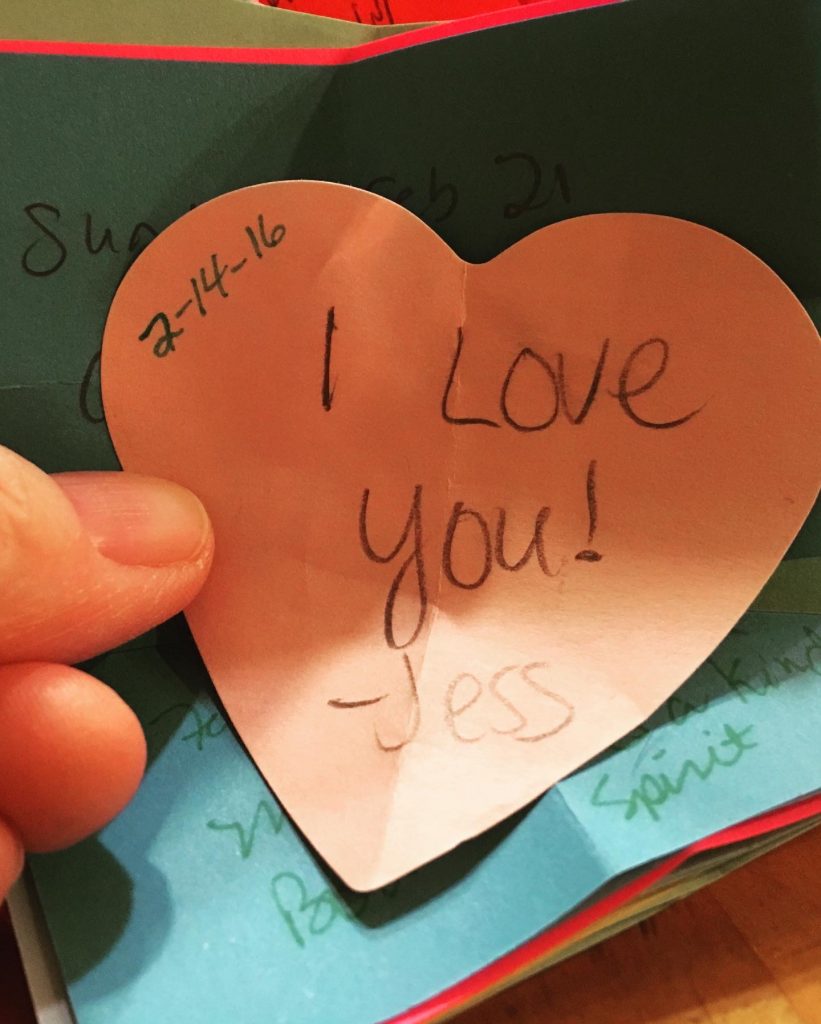 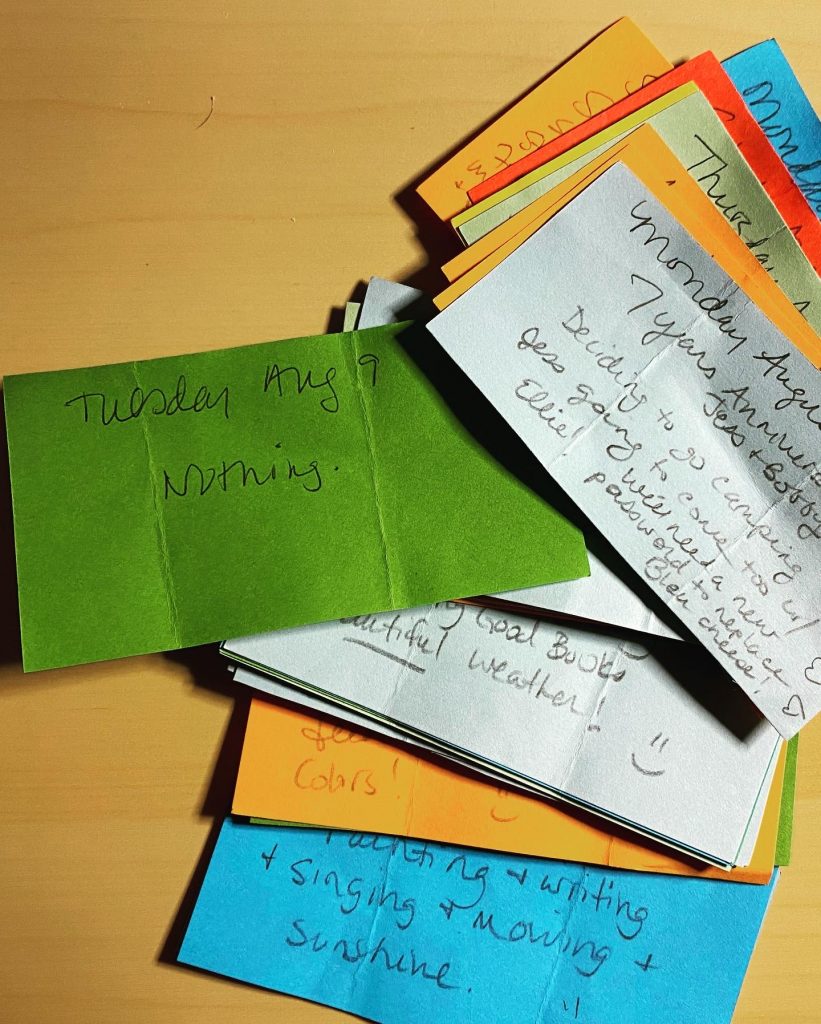 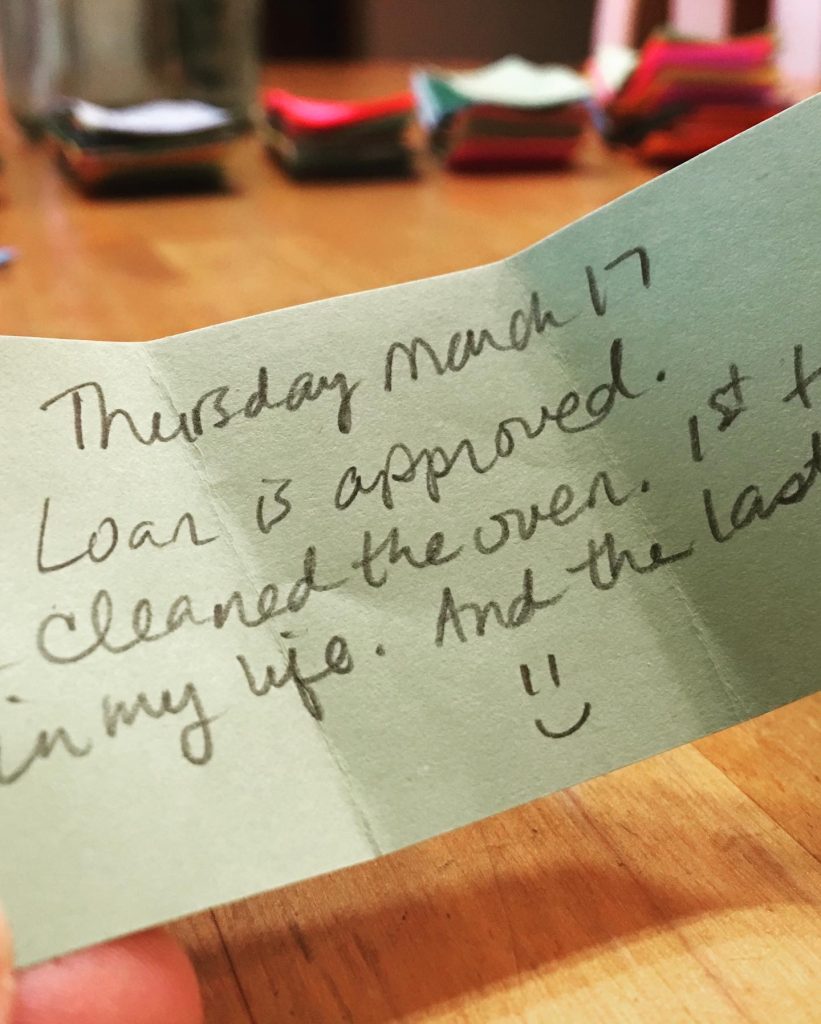 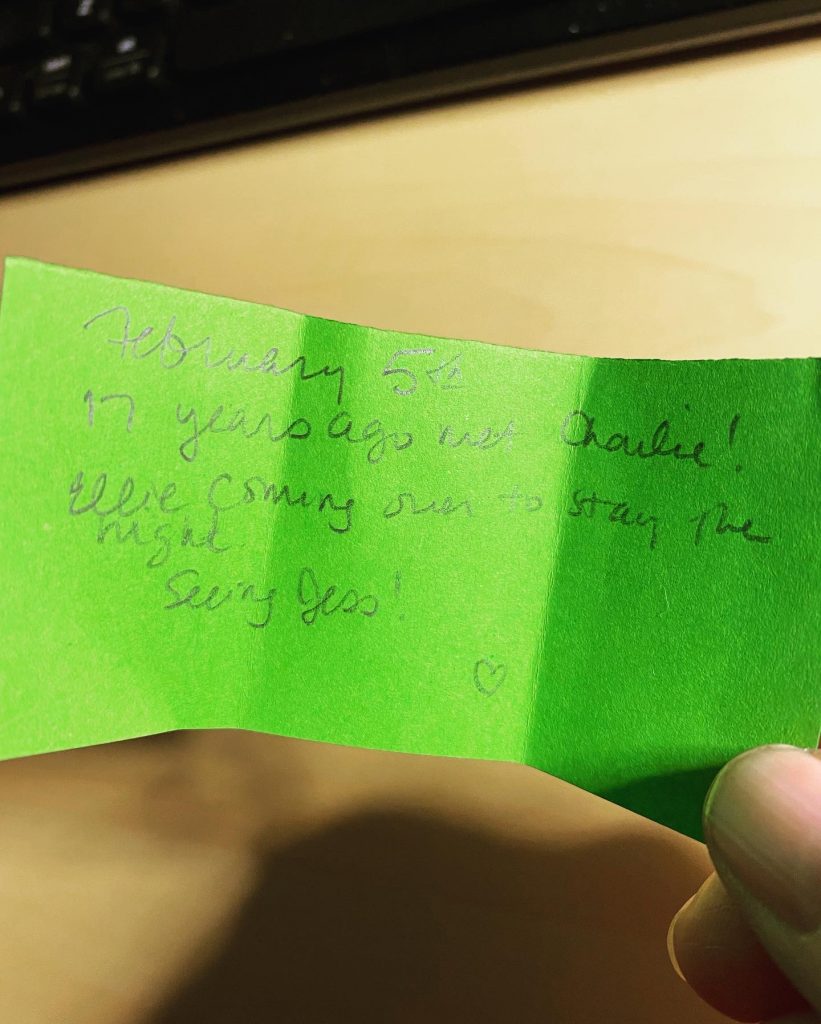 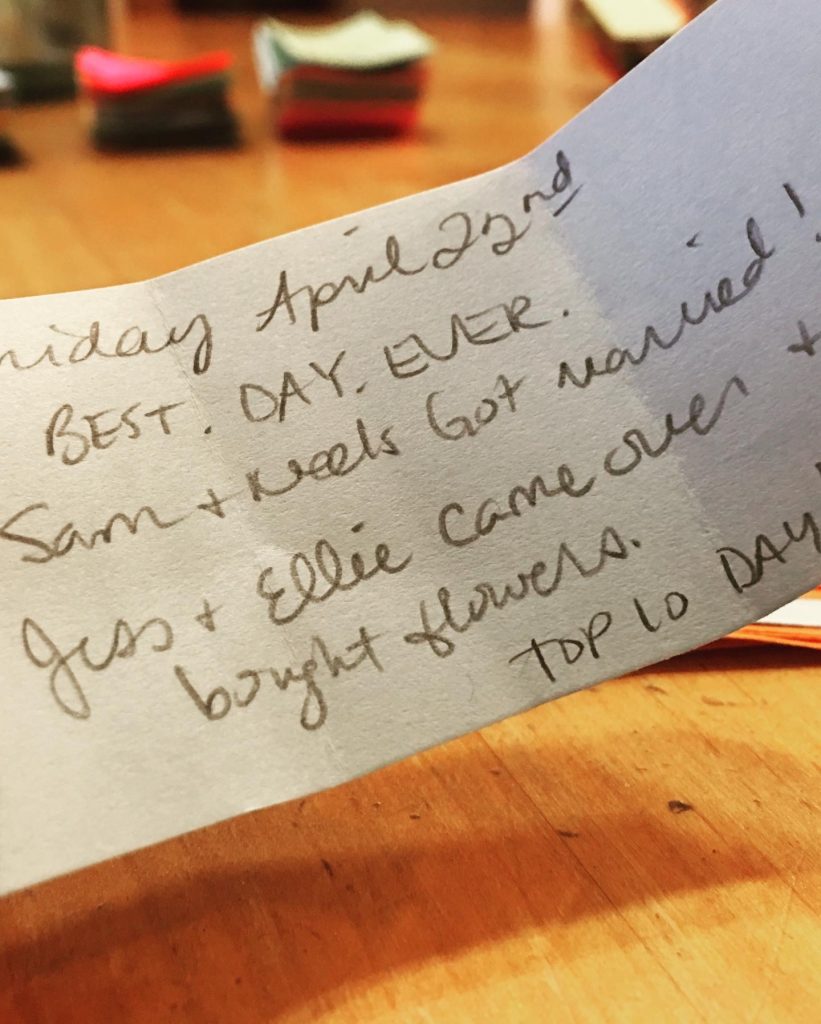 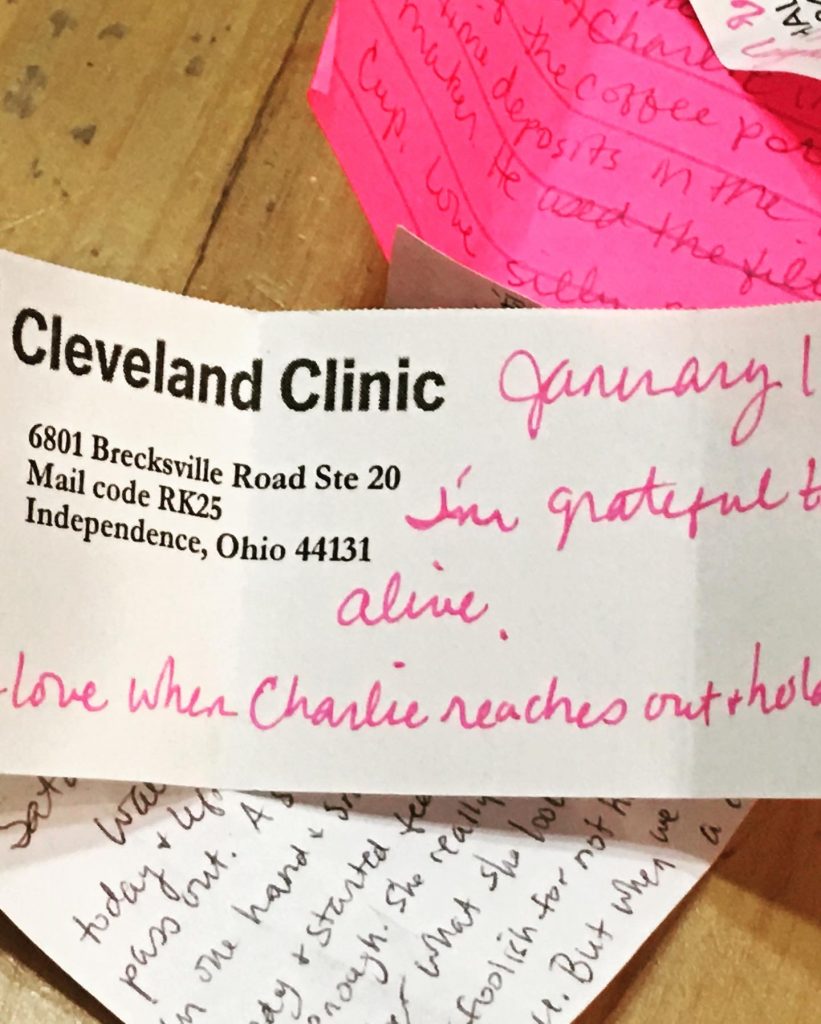 The object I kept for too long

It’s a poignant scene. The pet dog, a collie, interceding on behalf of a little girl standing in the corner. He begs for his mistress to be released from her punishment.

The piece of art is called A Special Pleader, and they sold reproductions in the 1980s. Granddad adored the picture, and he gifted me one to hang in my first home.

After I had children, he would point to the print on the wall and tell them stories about my childhood pet collie, Taurus. Then he would launch into a monologue about his interpretation of the artwork. He would lament the little girl’s plight.

“Look how sad she is, what could she have done wrong?” he would ask and answer, “Even the dog knows the little girl doesn’t deserve such a harsh sentence.”

This was priceless coming from the man who never hesitated to wield his belt on my body when I was a child.

I quit hanging the picture in my home in the 1990s, yet with every household move, it came along. Someone dropped it once, and the glass cracked, yet I kept it.

In 2016, I converted the spare bedroom, a storage area for junk, into a dedicated studio. During the haul out, I picked up the print and the frame released its broken glass. I still kept it, this lighter version, hidden in the back of a closet.

Once the room was empty, I painted walls and dubbed it Studio BE. After a few years of using the reclaimed space, of honoring my creativity, the dormant artist within wakened and the desire to purge the old to make way for the new resurfaced.

I retrieved the gift from the back of the closet and leaned it against the waste can by the curb. Back in my studio, I sat by the window and stared at the object relegated to the trash. The painting I had toted 35 years of my life—if I let it go, will I still be the same? I hoped not.

I turned from the window and picked up a paintbrush. I didn’t even notice when the truck took it away.

This is the 48th story in the Objects as Waypoints Writing Project series.

I have a signed, limited edition art print of Switzer Bridge surrounded by trees in autumn glory. It’s a covered bridge no longer used by vehicles but open to foot traffic near Stamping Ground, KY. I purchased the piece at a nearby bookshop the same day my then boyfriend, who’s from that tiny town, took me there to show me a small piece of where he had spent his youth. It’s also where he professed his love.

The artwork is a keepsake from our beginning. We had no way of knowing a dozen years later we would face a devastating illness.

I’ve read about some reasons they built covers on bridges: provide shelter for travelers, strengthen the entire structure, and prolong life.

We had no way of knowing my husband’s love would be just like a cover for a bridge during one of the hardest times in our 22 years of marriage.

For some years, I carelessly kept the framed print on a shelf that met the afternoon sunlight and its rich colors faded into a worn and comfortable patina.

You don’t go through these kinds of things and remain unchanged.

This is the 47th story in the Objects as Waypoints Writing Project series.

I don’t know why my family had such an affinity for handmade wooden boxes of various shapes and sizes, but I inherited the love for them and their backstories.

One of these boxes, a smallish rectangle with a hinged lid and dovetail joints, made its way through the hands of generations of women on my mother’s side, and landed in mine. My great grandmother kept a lock of hair wrapped in tissue and an abandoned cross stitch project inside the box and I became its caretaker.

I never learned whose head the lock of hair belonged to, but the unfinished cross stitch holds images of GG in her pink bedroom, sitting in her white rocking chair, the material draped over her lap, stitching by the glow of a nearby lamp woven into its fabric.

I’ll also never know why she stopped where she did, on the ‘a’ in the word ‘sake’, right before the next line, Yea, though I walk through the valley of the shadow of death, I will fear no evil.

She left the needle, still threaded with navy blue floss, tucked into the canvas, ready for her return. Over the years, it detached from the material and disappeared, a rusty imprint the only evidence it existed.

I’ve thought many times about completing her project, but deep down, in some irrational part of my heart, I think if it’s finished, then she’s done, she’s really gone. But if it remains a work in progress, then it’s simply waiting for her return.

I refold it for the umpteenth time, place it back in the box, and close the lid once more.

This is the 46th story in the Objects as Waypoints Writing Project series.

I discovered kayaking in the spring of 2019 and spent the summer paddling flat water most weekends with my husband. We enjoyed the sport recreationally, but when I saw the ad for a fun float and race in October, I signed us up.

We showed up at the Big South Fork of the Cumberland River in Kentucky for the 4-mile fun float and race and I’m still surprised to this day; I wasn’t laughed off the boat ramp.

I’m sure there were snickers and whispers. I had brought a 75 lb. monster of a kayak, and it was probably the biggest one among all the sleek boats. I consoled myself I was there for the fun float portion of the race.

My husband was there mainly for moral support in his canoe and when the gun fired to start, I was already in last place. He paddled along the bank nearby while I kept a steady rhythm, keeping my eyes on the yellow plastic inflatable in the bend a mile away. The goal was to paddle around it, come back, then do it again.

I reached the turning point and was ready to call it done. I had paddled over 40 miles that summer, so I thought surely I could do 4 miles, but it was just too much.

I limped back to the start line and told the official it was my finish line and dropped out. We paddled around on the sidelines and cheered the other racers.

Later, we attended the awards ceremony held at the Whistle Stop Cafe. When the 4-mile fun float and race winners were called, they awarded only 1st and 2nd places. Since there were only three people in the race and one dropped out… Had I stayed in and finished, I would have had 3rd place, by default.

But that wasn’t why I entered the race. I had been curious about that world and it scared me to enter, even at a novice level, and I wanted to see if I could do it.

There’s a quote printed on my racing bib, “Don’t live down to expectations. Go out there and do something remarkable.” — Wendy Wasserstein

I keep the numbers pinned to a board as a reminder it’s important to break out of my comfort zone and that sometimes when I do, remarkable things can happen.

This is the 45th story in the Objects as Waypoints Writing Project series. Stories 43 and 44 are out on submission.